The bright and ambitious painting of the artist Alexei Naumov is exhibited in Ungurmuiza for the first time. He consistently works in the landscape genre, paints intensively in the open air, moreover, not only in the warm countries of Southern Europe, where the dark greenery of cypress contrasts with the bright sky, but also in Latvia’s colorful summers and harsh winters. His works are based on a convincing and balanced stroke, vital color and a composition that captures the essence of the specific place.

Aleksejs Naumovs (1955) graduated from the Monumental Painting Department of the Latvian Academy of Arts under the supervision of Professor Indulis Zariņš and from the creative postgraduate studies at the master workshop of Professor Eduards Kalniņš. Former French Government Fellow (Sorbonne Art Plastiques, L’Ecole Nationale des Beaux-Arts dе Paris), studying painting in Paris. Professor at the Latvian Academy of Arts, Rector of the Latvian Academy of Arts (2007-2017). He has been the initiator, leader, curator of exchange programs and exhibitions in various cooperation projects in Italy, France, Japan, Germany, Austria, the Netherlands, Spain, Greece, Russia, the USA and elsewhere. Has organized more than 60 solo exhibitions. In 2018, a retrospective exhibition of his works “Endless Landscape” took place in the Great Hall of the main building of the Latvian National Museum of Art, and an extensive catalog of his works was published by Neputns.

Alexei Naumov’s contribution to art has also been appreciated by the Latvian state, awarding the artist the highest award – the Order of the Commander of the Cross of Recognition. In 2016, he was awarded the French Order of Arts and Literature. 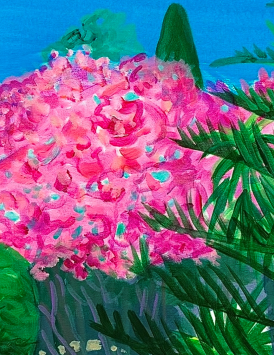 This site uses cookies – small text files that are placed on your machine to help the site provide a better user experience. Learn more
Got it